32 NERDY NUMBERS FROM A CENSUS OF MIDDLE-EARTH

J.R.R. Tolkien would be turning 123 years old this week—he was born on January 3, 1892. Were he alive now, he would be oldest human ever, but he would still fall eight years short of Bilbo Baggins’s hobbit record. Maybe you’re a Tolkienphile, and you knew that. Actually, I knew that, too. Tolkien’s books are what inspired me to become a writer. My oldest son’s middle name is “Balin.” I named my dog “Pippin.”

But there are J.R.R. Tolkien fans, and then there is Emil Johansson.

A Swedish chemical engineering student, Johansson first read The Lord of the Rings in 2000. A dozen years later, he published a website that he called the Lord of the Rings Project. He generally shortens it to LotrProject. That’s about all he does halfway.

His website includes perhaps the most extensive genealogy of Middle-Earth, including family trees for, well, just about everybody. Want to know if the dwarves Balin and Oin are distant cousins? Just look it up. And there is a historical timeline of… everything. When did the city of Gondolin fall in the First Age? When were the Rings of Power created in the Second Age? When did Boromir set off for Rivendell in the Third Age? It’s there. 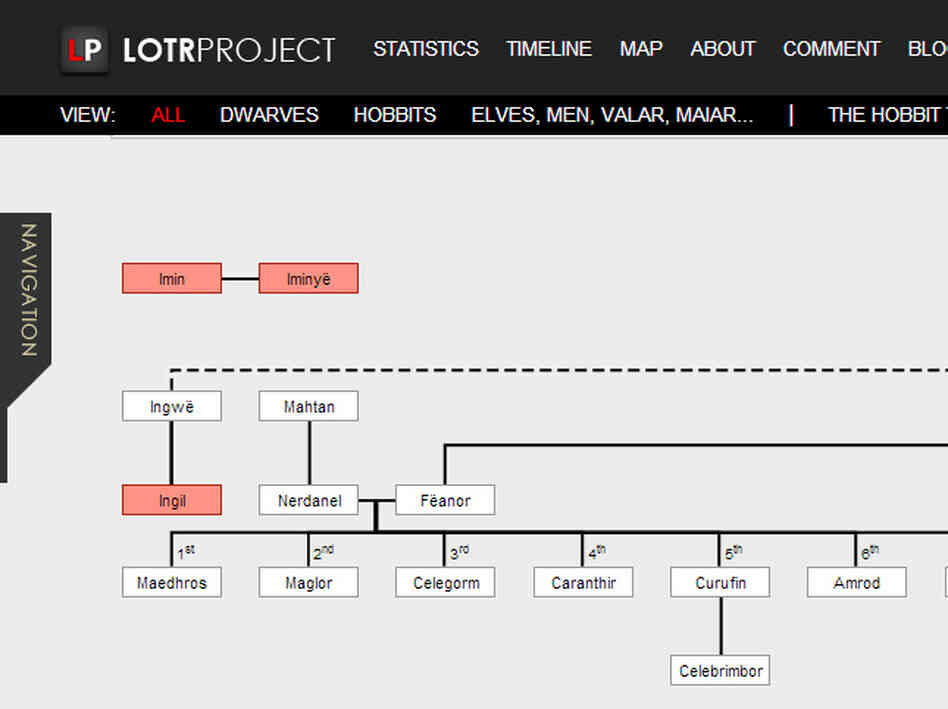 There’s even a Periodic Table of Middle Earth. And a map of the routes taken by each member of the Fellowship of the Ring. Want to know how long far Frodo and Sam traveled each day? Check it out. Johansson may know more about the comings and goings of Gandalf and Gollum than most Civil War historians know about the travels of Robert E. Lee. Really, I’m not kidding.

Perhaps most remarkable is Johansson’s census of Middle-Earth. Basically, he went through Tolkien’s books—The Hobbit, The Lord of the Rings trilogy, and the epic tales in The Silmarillion—and he took note of every named character. All of them. And then he crunched the numbers—about race and sex and life expectancy and population.

2. Only 18 percent of the total number of characters are female—not due to a lack of females in Middle-Earth but rather because Tolkien simply didn’t describe many of them.

4. Of the 14 “good” Valar—Tolkien’s version of the denizens of Mount Olympus—seven are male, and seven are female. There is a 15th—the male Morgoth, the source of all evil on Middle-Earth.

5. Although there is a disparaging reference to Gloin’s wife in the film The Hobbit: The Desolation of Smaug, only one female dwarf is actually named in Tolkien’s books. She is Dis, the mother of Fili and Kili, the youngest warriors who were members of Thorin and Company.

6. Elves live forever, unless killed, but Johansson figured the life span of a dwarf to be roughly 195 years—although that takes into account a rather small sample size and the fact that most of the dwarves mentioned in the books died in battle.

7. One of the original dwarves created—Durin the Deathless—lived to be nearly 2,400 years old.

8. Dwalin, brother of Balin and member of Thorin and Company, is the dwarf with the second-longest known life span—340 years.

9. At the time of their death during the Battle of the Five Armies, Fili (82) and Kili (77) were young by dwarven standards.

10. The dwarf with the shortest known life span, Fror, was slain by a dragon at age 37.

11. The life expectancy of men depends on one’s ancestry. Numenoreans and their descendants lived, on average, about 237 years. Other men averaged an 82-year life span.

12. At the time of The Fellowship of the Ring, Aragorn was—believe it or not—about 88 years old. He was the last of the Numenoreans and lived to be 210.

13. The oldest living man, Elros, lived to be 500 years old, but he was a half-elf who chose to be a man (his brother Elrond chose to be an elf and spent about 6,000 more years on Middle-Earth). Aside from Elros, twenty known men lived at least 300 years (a dozen exceeded 400 years).

14. There is one account of a human who lived only to the age of three—Lalaith, a girl who died during a plague.

15. Every line of kings of men—of Numenor, Gondor, Arnor, Arthedain, and the Dunedain—saw a decline in their life expectancy as the years passed

16. The second-longest life span of any hobbit in history was that of Bilbo Baggins himself, who was age 131 (one year older than Gerontius Took—the “Old Took”) when he sailed into the West.

17. Bilbo didn’t even approach the age of the oldest hobbit. That would be Smeagol—aka Gollum—who perished in Mount Doom at the age of 589.

18. Not surprisingly, the highest-known population of Middle-Earth—judging only by the described characters in Tolkien’s books—occurred at the end of the Third Age, during the events described in The Lord of the Rings.

19. The second-highest-known population era peaked around the year 500, at the end of the First Age, just before the Wars of Beleriand and the Great Battle.

20. The first man is mentioned about halfway through the First Age.

21. Feanor, considered perhaps the mightiest of all elves of Middle-Earth, had seven sons.

22. The hobbit who fathered the most children? That would be Sam Gamgee. Samwise and his wife (the former Rose Cotton), had 13 children. And Sam was one of six children himself.

23. In The Hobbit, the approximate distance traveled by Bilbo and his companions to Rivendell was 397 miles. It took them 38 days to get there.

25. Bilbo and his companions trekked another 457 miles to the Halls of Thranduil (the Elven King in Mirkwood Forest). It took them another 54 days to get there.

26. By far the fastest they moved during that span of time was 58 miles in one day.

27. Another 81 days later, they finally arrived at the Lonely Mountain—although that included only six days of actual travel.

28. In The Lord of the Rings, Frodo and his three hobbit pals traveled a longer route to Rivendell (458 miles). But they made it there faster (27 days).

29. They rested in Rivendell for a whopping 64 days.

30. Then they traveled another 464 miles to Lothlorien. Including their excitement in the Mines of Moria, that trek took them another 27 days.

32. Frodo and Sam had to travel another 880 miles (some of it with their Fellowship companions). It took them 37 days to reach Mount Doom.