31 FABULOUS PHILOSOPHIES FROM THE PHANTOM TOLLBOOTH

In chapter three of The Phantom Tollbooth, young protagonist Milo and his dog-clock-sidekick Tock arrive at the gates to the city of Dictionopolis, where they encounter a gateman. There follows this exchange:

“You can’t get in without a reason.” He thought for a moment and then continued. “Wait a minute; maybe I have an old one you could use.”

He took a battered suitcase from the gatehouse and began to rummage busily through it, mumbling to himself, “No… no… no… this won’t do… no… h-m-m-m… ah, this is fine,” he cried triumphantly, holding up a small medallion on a chain. He dusted it off and engraved on one side were the words “WHY NOT?”

“That’s a good reason for almost anything—a bit used, perhaps, but quite serviceable.”

And that is as good a reason as any why, when we started our publishing venture, we named it Why Not Books. Well, that and the words of George Bernard Shaw: “You see things as they are and ask, ‘Why?’ I dream thing that never worry and say, “Why not?’”

With that in mind, I offer 31 philosophical musings from some of Juster’s most memorable characters—from the Humbug to the Mathemagician to Princesses Rhyme and Reason. They are life lessons from a lively mind:

1. King Azaz and the Mathemagician: “So many things are possible just as long as you don’t know they’re impossible.”

2. The Princess of Sweet Rhyme: “It’s not just learning things that’s important. It’s learning what to do with what you learn and learning why you learn things at all that matters.”

3. The Humbug: “Things which are equally bad are also equally good. Try to look at the bright side of things.”


4. Alec Bings: “If something is there, you can only see it with your eyes open, but if it isn’t there you can see it just as well with your eyes closed. That’s why imaginary things are often easier to see than real ones.”

5. The Soundkeeper: “Did you know that there are almost as many kinds of stillness as there are sounds? But, sadly enough, no one pays any attention to them these days… Each one is different, you know, and all very beautiful, if you listen carefully… If there’s one thing we need more of around here, it’s less noise.”

6. The Dodecahedron: “If you had high hopes, how would you know how high they were? And did you know that narrow escapes come in all different widths? Would you travel the whole wide world without ever knowing how wide it was? And how could you do anything at long last without knowing how long the last was? Why, numbers are the most beautiful and valuable thing in the world.”

7. The .58 Child: “One of the nicest things about mathematics, or anything else you might care to learn, is that many of the things which can never be, often are. You see, it’s very much like your trying to reach Infinity. You know that it’s there, but you just don’t know where—but just because you can never reach it doesn’t mean that it’s not worth looking for.”

10. The Terrible Trivium: “What could be more important than going unimportant things?... Think of all the trouble it saves. If you only do the easy and useless jobs, you’ll never have to worry about the important ones which are so difficult.”

11. The Princess of Sweet Rhyme: “Many place you would like to see are just off the map and many things you want to know are just out of sight or a little beyond your reach. But someday you’ll reach them all, for what you learn today, for no reason at all, will help you discover all the wonderful secrets of tomorrow.”

12. Milo: “Why is it that quite often even the things which are correct just don’t seem to be right?”

13. The Princess of Pure Reason: “You must never feel badly about making mistakes as long as you take the trouble to learn from them. For you often learn more by being wrong for the right reasons than you do by being right for the wrong reasons.”

14. The Mathemagician: “You’ll find that the only thing you can do easily is be wrong, and that’s hardly worth the effort.”

15. The Dodecahedron: “As long as the answer is right, who cares if the question is wrong?”

16. Canby: “Every time you decide something without having a good reason, you jump to Conclusions whether you like it or not. It’s such an easy trip to make that I’ve been here hundreds of times.”

17. The Whether Man: “Expect everything, I always say, and the unexpected never happens.”

18. The Gelatinous Giant: “If it’s one thing I can’t swallow, it’s ideas: they’re so hard to digest.”

19. Kakofonous A. Dischord, Doctor of Dissonance: “I only treat illnesses that don’t exist; that way, if I can’t cure them, there’s no harm done.”

20. The .58 Child: “If you didn’t have any money at all, but you happened to be with four other people who had ten dollars apiece, then you’d each have an average of eight dollars… Think how much better off you’d be, just because of averages.”

21. The Humbug: “We’re an old and noble family, honorable to the core—Insecticus humbugium, if I may use the Latin. Why, we fought in the crusades with Richard the Lion Heart, crossed the Atlantic with Columbus, blazed trails with the pioneers, and today many members of the family hold prominent government positions throughout the world. History is full of Humbugs.”

22. The Mathemagicians: “I often find that the best way to get from one place to another is to erase everything and begin again.”

23. Faintly Macabre, the not-so-wicked Which: “Today people use as many words as they can and think themselves very wise for doing so. For always remember that while it is wrong to use too few, it is often far worse to use too many.”

24. The Cabinet of King Azaz of Dictionopolis: “We’re not interested in making sense… Besides, one word is as good as another—so why not use them all?... Then you don’t have choose which one is right… Besides, if one is right, then ten are ten times as right.”

25. Humbug: “A slavish concern for the composition of words is the sign of a bankrupt intellect.”

26. Alec Bings: “We always see things from the same angle. It’s much less trouble that way. Besides, it makes more sense to grow down and not up. When you’re very young, you can never hurt yourself falling down if you’re in mid-air.” 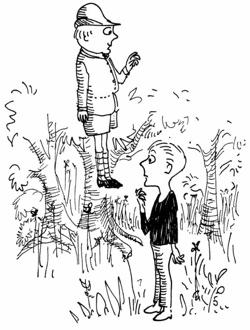 27. The Whether Man: “I’m the Whether Man, not the Weather Man, for after all it’s more important to know whether there will be weather than what the weather will be.”

28. The Mathemagician: “Here in Digitopolis we have our meals when we’re full and eat until we’re hungry. That way, when you don’t have anything at all, you have more than enough.”

29. The .58 Child: “Infinity is a dreadfully poor place. They can never manage to make ends meet.”

30. The Princess of Pure Reason: “You had the courage to try; and what you can do is often simply a matter of what you will do.”

31. Milo: “It certainly pays to have a good look at things.”