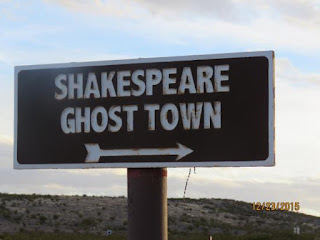 August 9 is National Book Lovers Day. So I’m going to explore that in a literal sense.

There used to be a couple of communities in Florida, both of them settled sometime in the 1850s. One had a few general stores and some other businesses. The other boasted, at the very least, a post office. The towns were only about two miles apart, each one’s destiny certainly intertwined with the other’s. But today both are no more. They’re dead.

Their names? Romeo and Juliette.

Okay, so the spelling of the latter is a bit off. But c’mon, doesn’t that give you ghost town goosebumps?

Then again, there are plenty of Shakespearean places that you can visit during a cross-country excursion. We can start with a place called, well, Shakespeare, located in southwestern New Mexico, just south of the city of Lordsburg. That one’s a ghost town, too—much ado about nothing, one might say. But Shakespeare, New Mexico, actually offers occasional tours. And, in perhaps the ultimate anachronism, it has a website (shakespeareghosttown.com).

Want to further immortalize the Immortal Bard in the form of an epic road trip? Try this somewhat manageable itinerary:

But Bill Shakespeare isn’t the only literary icon whose name graces the tiniest dots on the American map. Sure, you could visit places like Ulysses (Nebraska) or Frankenstein (Missouri). Or, for that matter, Reading (Pennsylvania). But there’s a whole journey in exploring the authors and poets themselves. So we at the Why Not 100 suggest packing up a few dozen pieces of classic literature—books like A Moveable Feast and Call of the Wild and A Tale of Two Cities—to read while passing through a hamlet bearing the writer’s name.

Come to think of it, there is the germ of an idea for a book in there. I’m thinking along the lines of an experimental sort of travel memoir in which, for instance, the passages about the hamlet of Hemingway, South Carolina (“Barbecue Capital of the World”) are written in Hemingway’s minimalist style. (They fed us country-style pork. It was barbecued. It was tasty.)