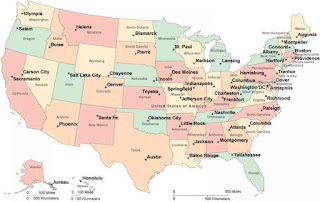 I’ve long believed that reading across America is one of the best ways to experience it. The Fourth of July celebrates a nation, but really it’s a community-by-community display of attitudes and priorities. Fireworks? A parade? A lawn party? A slo-pitch softball tournament? A symphony? What say you? No, you have to travel to truly rejoice in America.

As long as there have been travelers, there have been attempts to put the experience into words. But sometimes what has already been written can improve the ride. On my first-ever cross-country RV excursion in 1995-96, I began by reading a trilogy of road classics to get me in the mood – On the Road by Jack Kerouac, Travels with Charley by Steinbeck and Blue Highways by William Least Heat-Moon. But I soon found an even better way to give myself a sense of place – by regionalizing my reads.

So while we were parked for the night in Montgomery, I journeyed through the pages of To Kill a Mockingbird, and I could almost taste the red Alabama dust. In Missoula, I dove into A River Runs Through It and began to understand Montanans’ relationship with the landscape. On the banks of the Mississippi River, I spent some time with Twain’s Adventures of Huckleberry Finn and realized the myriad stories at every bend in the great waterway.

Each and every time, I was infused with a greater understanding of where I was.


I could ponder Thomas Wolfe’s description of North Carolina in Look Homeward, Angel (“clumped woodlands, the bending sweep of the fields, the huge flowing lift of the earth-waves”) and then appreciate the scenic poetry myself during my drive the following day. I could read Edward Abbey’s Desert Solitaire in Utah’s Arches National Park and then anticipate a sunrise consisting of a “flaming globe, blazing on the pinnacles and minarets and balanced rocks.”

So for the would-be traveler out there—either by vehicle or vicariously—what follows is a list of 50 must-reads, one for each state. The list, of course, is subjective. In fact, a compilation of books NOT included would feature the likes of Midnight in the Garden of Good and Evil (John Behrendt, Georgia), Empire Falls (Richard Russo, Maine), and Walden (Henry David Thoreau, Massachusetts). But then I would have to discard some of these: