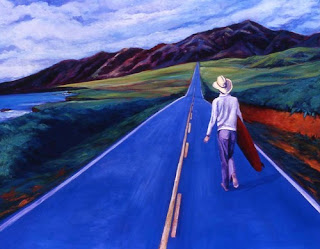 5. “A man becomes his attentions. His observations and curiosity, they make and remake him… Whitman calls it ‘the profound lesson of reception.’”

6. “A traveler who leaves the journey open to the road finds unforeseen things come to shape it.”

7. “To the rider of back roads, nothing shows the tone, the voice of a small town more quickly than the breakfast grill or the five-thirty tavern.”

8. “Sometimes a man’s experience is like the sweep second hand on a clock, touching each point in its circuit but always the arcs of movement repeating.”

9. “Reading my notes of the trip—images, bits of conversations, ideas—I hunted a structure in the events, but randomness was the rule.”

10. “A tactic returned to me from night maneuver training in the Navy: to see in deep darkness you don’t look directly at an object—you look to the left; you look at something else to see what you really want to see. Skewed vision.”

11. “What is it in a man that for a long while lies unknown and unseen only one day to emerge and push him into a new land of the eye, a new region of the mind, a place he has never dreamed of?”

12. “Other than to amuse himself, why should a man pretend to know where he’s going or to understand what he sees?”

13. “My skewed vision was that of a man looking at himself by looking at what he looks at.”

14. “’Nothing,’ Homer sings, ‘is harder on mortal man that wandering.’ That’s why the words travel and travail have a common origin.”

15. “The annals of scientific discovery are full of errors that opened new worlds… If a man can keep alert and imaginative, an error is a possibility, a chance at something new; to him, wandering and wondering are part of the same process, and he is most mistaken, most in error, whenever he quits exploring.”

16. “No place, in theory, is boring of itself. Boredom lies only with the traveler’s limited perception and his failure to explore deeply enough.”

17. “I asked three people to confirm which mountain was which; while all agreed on the location of Hood, they argued over the peaks in Washington. To live so uninformed before such grandeur is the hallmark of a true native son.”

Next, 11 descriptions of people, the kind that make a writer jealous, wishing he or she had come up with it first:

18. “I expected a grandmother, wiping her hands on a gingham apron, to come from the kitchen. Instead I got Brenda. Young, sullen, pink uniform, bottlecaps for eyes, handling her pad the way a cop does his citation book.”

19. “Her face, pallid like a partly boiled potato, looked as if carved out with a paring knife.”

20. “Ray, a jagged man, sat down beside me… turned to me and in my face opened a smile like a jackknife.”

21. “a woman with a butter-almond smile”

22. “His skin shone like wet delta mud, and his smile glittered like a handful of new dimes.”

23. “a woman shrunken into odd angles”

24. “a fellow with tarnished eyes”

25. “He laughed and the gullies in his cheeks changed course.”

26. “Two obese women with faces they might have bought at K-Mart”

27. “His face was a whorl of lines like fingerprints.”

28. “The waitress, with a grudge of a face, complained her way around.”

Finally, another 11 vividly described scenes that make vicarious travel nearly as inspiring as the real thing:

29. “The pastures grew a green almost blue, and syrupy water the color of a dusty sunset filled the ponds.”

30. “The overcast moved east like a gray woolen blanket being pulled back, and the sun came in low beneath a wrinkling of clouds. Then a sunset happened—mauve, cerise, puce—so garish I couldn’t take my eyes away.”

31. “Sundown, taking color from the land, briefly spread it low over the western sky.”

32. “Dirty and hard, the morning light could have been old concrete.”

33. “The land it traversed looked like an illustration from a child’s book: a whimsy of rock shapes, a fancy of spongy bushes, a figment of trees. Two loping deer could have been unicorns, and the fisherman under a bridge a troll.”

34. “Dark clouds moved in and piled against the mountains like flotsam washed ashore.”

35. “tractors plowing stubble under and raising tall spumes of dust”

36. “the river, a twisted strand of tourmaline”

38. “The desolation seemed to have velocity it hit so hard.”