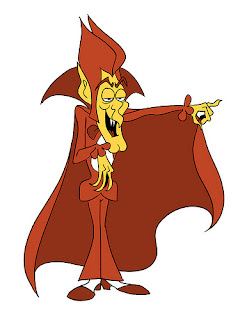 Any writer will tell you: The name has to match the character.

Just take a stroll through another Why Not 100 list—the 70 best character names in literature—and try to re-imagine many of those names. It’s not easy. What if Huckleberry Finn was Nat Bricklebush? What if a Golden Ticket (found inside a Lervin bar) earned you a tour of Larry Lervin’s chocolate factory? What if Hannibal Lechter was Ernest Munch?

Literature is filled with iconic characters whose names have become so part of our collective psyche that we can’t quite imagine them being anything else. Count Dracula. Sherlock Holmes. Ebenezer Scrooge. Gandalf the Grey.

But then, we didn’t see the first drafts.

Here are two-dozen classic characters whose iconic names were not the originals:

Originally, Bram Stoker called his legendary vampire “Count Waympr.” But then he came across a historical account of Vlad II of Wallachia, otherwise known as Vlad Dracul. Besides the literary impact, fans of Count Chocula breakfast cereal are grateful.

Sherringford was an early choice by Sir Arthur Conan Doyle, which would have let to a whole generation of boys saying, “No shit, Sherringford.”

Fascinating factoid: Literature’s Sherlock Holmes never actually uttered the phrase most attributed to him. He said, “Elementary!” And he said, “My dear Watson.” But never in the same sentence until a 1929 film called The Return of Sherlock Holmes. But imagine this: “Elementary, my dear Sacker.” Holmes’s friend was nearly named Ormond Sacker.

Legend has it that just before Gone with the Wind went to print, Margaret Mitchell changed her main character’s name from Pansy to Scarlett. Maybe she became aware of the need when she reexamined the scenes between the maid Prissy and her mistress Pansy.

Speaking of which… cartoonist Harold Gray’s original pitch was about exploring explore the adventures of a little orphan boy named Otto, complete with adorable curls. But newspaper publisher Joseph Medill Patterson supposedly responded (remember this was the 1920s), “The kid looks like a pansy to me. Put a skirt on him, and we’ll call it ‘Little Orphan Annie.’”

You’re creating a character, a girl who is smart and serious and acutely aware of the dangers that surround her. So what do you name her? Hermione Puckle. Realizing that the surname “didn’t suit her at all,” Joanne Rowling smartly renamed her. Interestingly, continuing an odd theme here, Hermione’s foil at Hogwarts is Pansy Parkinson.

The original author’s name is a pseudonym itself—Carolyn Keene being the combined creation of sisters Benson and Harriet Adams. As for their literary creation, the girl detective was almost named Diane Dare, Helen Hale, even Stella Strong. Why they settled on Nancy Drew is a bit of a mystery.

“Mallory” was the original choice, presumably an homage by Raymond Chandler to English author Sir Thomas Malory. But his wife thought “Marlowe” sounded more hard-boiled. She was right.

He appears in three Shakespearean plays, this corpulent comic foil of a knight. But the Immortal Bard originally wrote him as “John Oldcastle”—until a fellow named Lord Cobham, descendant of a real fellow named Sir John Oldcastle—complained.

She was Charlotte Bronte protagonist in Villette, but she was first christened “Lucy Snowe.” And Bronte apparently wished she had kept the original. “I rather regretted the name change,” she later admitted. “A cold name she must have.”

The younger siblings of Peter Pevensie, High King of Narnia, were called “Ann” and “Martin” and “Rose” in an early version of The Lion, the Witch and the Wardrobe.

No, it wouldn’t have changed the title of Charlotte’s Web, but E.B. White originally imagined her as a Grey Cross spider (Epeira sclopetaria), so she was known as “Charlotte Epeira.” But this perfect pig publicist was actually a barn spider—Araneus cavaticus. So E.B. White humbly changed the eight-legged one’s last name.

Eoin Colfer named the title character of his Artemis Fowl books after Artemis (the goddess of archery and hunting) and Fowler (an Irish name that sounded like “foul.” Said Colfer, “It’s the nasty hunter basically.” But his initial name was “Archimedes.” Said Colfer, “I wanted a classic Greek name that would have an air of intelligence and genius about it. But I thought people would think it’s a book about Archimedes.”

My son Luke loves A Hitchhiker’s Guide to the Galaxy, his favorite character being the robot afflicted with severe depression. But author Douglas Adams originally wanted to name the character after a rather socially inept friend of his named Andrew Marshall. So it would have been “Marshall the Paranoid Android.” Don’t tell the android. It’ll just upset him.

This one is likely legend misread as fact. It has been claimed that Charles Dickens considered a few other names for his sickly child in A Christmas Carol. “Little Larry” was one. Not too bad. “Small Sam” was another. Meh. “Puny Pete was a third. Ugh. Then again, was anyone in the 19th century really known as Larry? 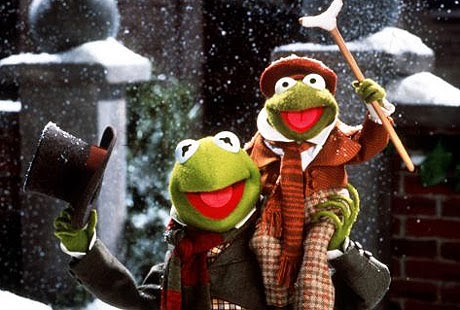 But wait, there’s more. We have arrived at the J.R.R. Tolkien portion of our list.

The man-bear of The Hobbit originally had a name that meant “bear” in Russian—“Medwed.”

It would have been a lot tougher for Viggo Mortensen to look quite so heroic in The Lord of the Rings trilogy if the returned king’s name had been the original—“Peregrin Boffin.” Even his nickname was originally Trotter.

Tolkien eventually gave him the Peregrin moniker. But this hobbit was originally “Odo.”

Meriadoc was the long version in the books, and it sounds a bit like the original—believe it or not, “Marmaduke.”

He carried a dark and dangerous burden. He was the courageous young fellow on whom the residents of Middle Earth pinned their final hopes. But the character’s original name makes him sound like something from Dr. Seuss—“Bingo Bolger-Baggins.”

Notes written in pencil on early drafts of The Hobbit show that the great wizard was originally “Bladorthin the Grey.” Yup. Eventually, Bladorthin became merely the name of a long-dead king mentioned in passing only once in Tolkien’s writings.

Believe it or not, the dwarven king was originally named “Gandalf.”