“Whatever the cost of our libraries,” Walter Cronkite once intoned, “the price is cheap compared to that of an ignorant nation.” Amen to that. So we all should celebrate National Library Week.

My son Luke, published author of DRAGON VALLEY at age 11 and GRIFFIN BLADE AND THE BRONZE FINGER at age 14, is a prodigy spawned not by a father who happens to be an author, but rather by a public library. He reads one or two books a week. Not short ones either. Perhaps he learned of the possibilities of the written word from observing me, but he actually learned to write through immersion in the pages of The Lord of the Rings and Eragon and Ender’s Game. And on and on and on. So many books with so much to offer an intellectually curious child. But it would have been an utterly unaffordable passion were it not for our local library. Which is why, when young Luke starting earning some money from sales of DRAGON VALLEY, he promptly donated a hefty portion back to our local literary repository.

Luke would be in heaven with a visit to the Hobbit House in Chester County, Pennsylvania. Frankly, I would, too. Imagine being a fan of J.R.R. Tolkien and getting to read a rare manuscript by the “father of fantasy literature” while seated in, oh, a random Halfling house in the Shire. In rural Pennsylvania, architect Peter Archer received a very unusual request from a client—design a fitting structure to house his valuable collection of Tolkien manuscripts, books and artifacts. Archer came up with a structure that looks as if it belongs in Middle Earth, not middle America. He built a cottage anchored to a stone wall, round doors, butterfly windows, half archways. It’s the kind of place where Bilbo would have written his memoirs, where Gandalf would bump his head, where any Tolkien library would be right at home.

But there are a great many fascinating public libraries, too. Just like some of the character’s from Luke’s favorite fantasy novels, some are quirkier than others, more mysterious, brimming with surprises.

So we at the Why Not 100 have chosen eight such examples—eight proudly peculiar American libraries:

“A library is a place where you can lose your innocence without losing your virginity.” ― Germaine Greer

WWNO public radio in New Orleans described this Rhode Island jewel as “a 19th-century library with the soul of a 21st-century rave party.” In the mid-1800s, athenaeums—social libraries that were conceived as community cornerstones where you visited antiquities and attended parties and lectures—were all the rage. They were member-supported libraries, and the Athenaeum is supposedly one of only 17 that remain. Among the quirks: A bust of the Greek goddess Athena watches from the open mezzanine above the main floor. And a wrought-iron railing circles the upper floor and bookshelves, fronted by pillars and topped with busts of writers. Oh, and there's still a card catalog. 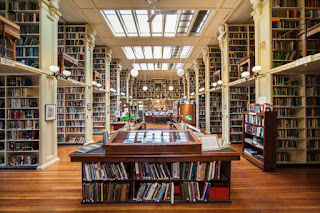 “I ransack public libraries, and find them full of sunk treasure.” ― Virginia Woolf

It began as the private library of financier Pierpont Morgan, who died in 1913. This New York City gem offers visitors an opportunity to view online its collection of rare manuscripts and early printed books—everything from Charles Dickens’s original manuscript for A Christmas Carol to Charlotte Bronte’s diary. But why has it been described as “like walking into a Hogwarts library?” Because one of the book cases is actual a hidden panel that swings open to reveal a spiral staircase to the second and third floors.

“To ask why we need libraries at all, when there is so much information available elsewhere, is about as sensible as asking if roadmaps are necessary now that there are so very many roads.” ― Jon Bing

It sits in two countries—a gift at the turn of the 19th century from the Haskell family, which wanted Canadians and Americans to have equal access. So this neoclassical building straddles the international border. The library collection and the opera stage are located in Stanstead, Quebec. But the door and most of the opera seats are located in Derby Line, Vermont. That’s why, on occasion, Haskell has been described as both “the only opera house in the U.S.A. with no stage” and “the only library in the U.S.A. with no books.” It has two addresses—1 rue Church, Stanstead, and 93 Caswell Avenue, Derby Line. The building is recognized as a historic site in both countries and houses a collection of more than 20,000 books in French and English. And running beneath the seats of the opera house and diagonally across the library’s reading room is a thick, black line, which represents the international boundary. 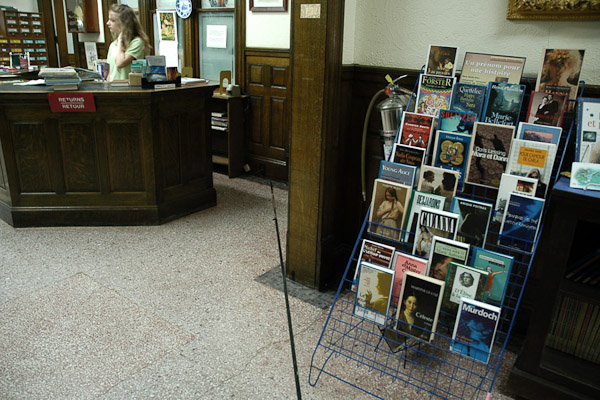 “People can lose their lives in libraries. They ought to be warned.” ― Saul Bellow

It’s the oldest public library in the state of Indiana (providing services since 1885), and they say it’s haunted. The first reported incident at this Victorian Gothic building in Evansville happened more than six decades ago to a library employee who had trekked through the snow to get there. Since then, a steady parade of patrons and employees have reported eerily similar sightings—the ghost of the Grey Lady. Several paranormal organizations have investigated over the years, setting up ghost cams throughout the building. There’s even a whole website devoted to the phenomenon—libraryghost.com.

“Librarians are tour-guides for all of knowledge.” ― Patrick Ness

Thirteen years before his death, in his 1971 novel The Abortion: An Historical Romance 1966, Richard Brautigan dreamed of a library as a home for “the unwanted, the lyrical and haunted volumes of American writing.” Authors would be able to place their manuscripts wherever they liked on the library’s shelves, preserving them for perpetuity even if no one would actually be allowed to read them. Well, a fellow named Todd Lockwood was inspired by the author, and today the Brautigan Library (in Vancouver, WA) describes itself as “a collaborative research and literacy project offering a collection of 304 physical and a growing number of digital manuscripts, all unpublished, shared by their authors, with interested readers worldwide.” Yes, these manuscripts can be read—during the open hours of the Clark County Historical Museum (no manuscripts circulate outside the collection). And it hosts National Unpublished Writers’ Say on the last Sunday of January, a celebration of Brautigan’s birthday.

“The idea of a library full of books, the books full of knowledge, fills me with fear and love and courage and endless wonder.” ― Elizabeth McCracken

In midtown Manhattan, this non-profit library and research center was founded by a sleight-of-hand artist named William Kalush. He was frustrated at the lack of reading material about his chosen field, so he conjured up what now consists of more than 12,000 volumes devoted to magic and its allied arts. Early conjuring books are a particular interest, including hundreds printed before the 20th century. There are manuscripts of magic methods dating as far back as the 1400s, as well as a collection of letters between famous magicians, apparatus sold by well-known magic creators, and original memorabilia from Harry Houdini himself.

“An original idea. That can't be too hard. The library must be full of them.” ― Stephen Fry

How do you pretty up a parking garage while smartening up a community? How do you turn a façade into an artistic (and literary) masterpiece? You paint a Community Bookshelf—a massive mural designed to look like an enormous row of books—along the south wall of a parking garage at the central branch of the KC public library.  The Kansas City mural, created by a design firm called Dimensional Innovations and completed in 2004, celebrates 22 classic titles. Each book’s spine measures about 9 feet wide and 25 feet tall. Members of the community nominated potential books, and then the library’s board of trustees chose the final 22 honorees. 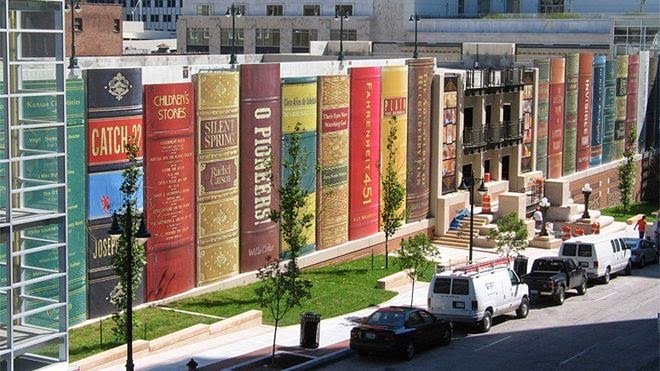 It’s such an inspired idea that a library in Russia later did much the same thing.

Housed in a vintage, red 1960s English phone booth—three feet wide, three feet deep and 100 inches tall—this little treasure in Clinton Corners, New York, is touted as the smallest public library in the United States. There are about 150 books and no librarian in the Book Booth (“bring a book, take a book” is the motto). It even has its own Facebook page.