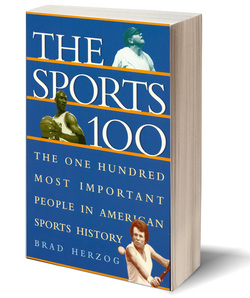 Unfortunately, the book is long out of print. If you want a copy, you’ll just have to contact me personally. And if you want some interesting bits of trivia that I discovered along the way, well, there’s plenty of that.


After all, my hope was to provide new information to even the already knowledgeable sports fan. And that included me. So here follows a list—not a list of the 100 figures ranked in the book; for that you can go here. This is a list of 55 fascinating facts (about 55 figures profiled) that I encountered along the way:

3. Babe Ruth’s record of 29 consecutive shutout innings as a pitcher in the World Series lasted longer than his mark of 60 home runs hit in a single season.

4. When James Naismith invented basketball as a 30-year-old P.E. instructor at the School for Christian Workers in Springfield, MA, the 18 men who played the first game were studying to be YMCA general secretaries. Final score of the first game: 1-0.

5. Albert Spalding, the late 19th century athlete-owner-businessman perhaps most responsible for spreading sports in America, once organized a world baseball tour that included games played at the Pyramids in Egypt.

6. Walter Camp, the Yale coach most responsible for developing modern football rules, came up with such basic innovations as 11 players to a side, the line of scrimmage, and the set of downs. He also coined the term “All-America.”

7. The iconic 1938 boxing rematch between African-American hero Joe Louis and Nazi Germany hero Max Schmeling lasted all of 124 seconds. Louis knocked him out.

8. The famous 1973 “Battle of the Sexes” in which tennis star Billie Jean King outplayed outspoken chauvinist Bobby Riggs was watched by a television audience of more than 50 million people. 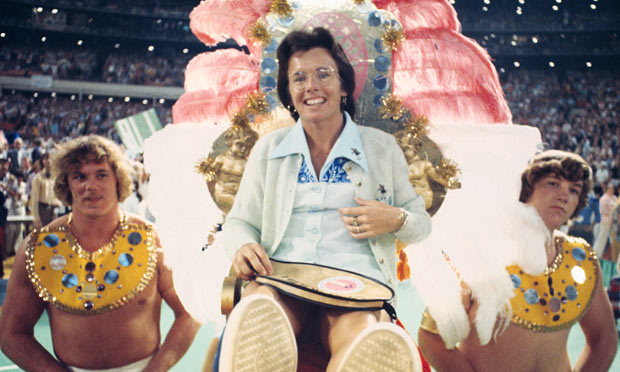 9. Roone Arledge of ABC sports, the man most responsible for modern sports television’s impact, once won an Emmy award for producing a puppet show.

11. When Marvin Miller took over as executive director of the Major League Baseball Players’ Association in 1966, the combined payroll of all major league clubs that year was less than the combined salary of Roger Clemens and Dwight Gooden a generation later.

12. Early 20th century heavyweight boxing champion Jack Johnson, an outspoken African-American in an era of widespread lynchings, was once arrested on a trumped-up charge of violating the Mann Act, a law passed in 1910 making the interstate transportation of women for “immoral purposes” illegal. It was meant to stop organized crime.

13. In 1915, just a few years before George Halas was one of the key figures in founding what became the National Football League, he was scheduled to depart on a ship, the Eastland, which capsized while docked in Chicago. Nearly 1,000 people died, but Halas missed the boat.

14. As a 5-foot-9 sophomore in high school, Michael Jordan was cut from his varsity team.

15. Harry Wright was the manager of the Cincinnati Red Stockings, the first traveling all-professional baseball club in 1869. His team averaged 42 runs per game that season and finished 57-0 against its amateur competition.

16. Nineteenth century bareknuckle brawler John L. Sullivan, the first significant mass cultural hero in American life, once earned 16 times more than the next most highly-paid athlete in the country.

17. Amos Alonzo Stagg, credited with inventing everything from the huddle to the lateral pass in football, scored his team’s only points in the first-ever public basketball game in 1892. He lived to be 102, dying in 1965 when Michael Jordan was a toddler.

18, When Red Grange was hired to play a series of exhibition football games with the Chicago Bears in 1925, he was paid $100,000, nearly twice what Babe Ruth was earning at the time. 19. The Duke of Windsor was once asked if he could be any man in the world other than himself. He replied that he would like to be Arnold Palmer.

20. When Jim Thorpe died in 1953, he was buried in Mauch Chunk, Pennsylvania, which agreed to change its name to Jim Thorpe in return for the honor.

22. When Pete Rozelle was named commissioner of the National Football League in 1960, the Los Angeles Herald Examiner called it “the zaniest act of the century.”

24. After Notre Dame football coach Knute Rockne died in a plane crash in 1931, more than 100,000 people lined his funeral route through Chicago.

25. Jesse Owens became an American hero by winning four gold medals in front of Adolph Hitler at the 1936 Summer Olympics in Berlin, but he was unable to capitalize on it financially. Just three years later, he filed for bankruptcy. 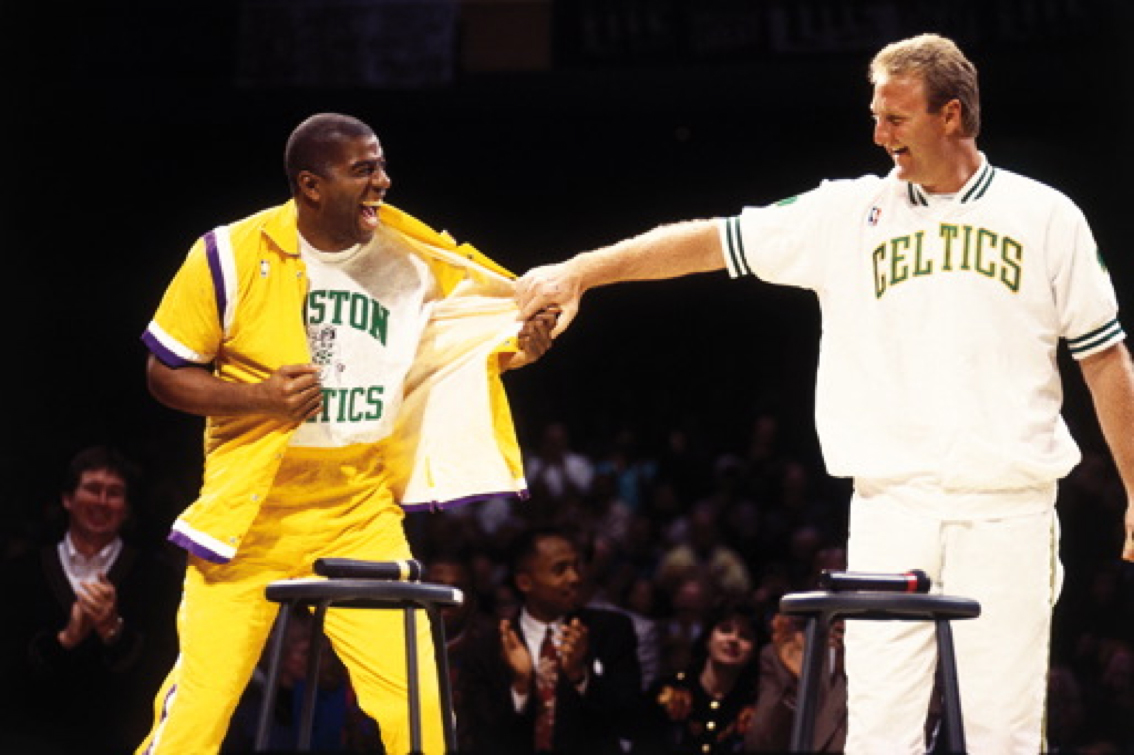 27. Larry Bird’s father was an alcoholic laborer who killed himself soon after Bird enrolled at Indiana University in 1974. Bird lasted just a few weeks with Indiana coach Bobby Knight before transferring to Indiana State.

28. Upon his death in 1993, transcendent tennis star Arthur Ashe was the first person to lie in state in the Virginia Governor’s Mansion since Civil War General Stonewall Jackson.

29. Playing against his peers in a hockey league as a 10-year-old, Wayne Gretzky scored 378 goals in 69 games—238 more goals than anyone else

30. The title of Joe Namath’s autobiography, written with Dick Schaap: I Can’t Wait Until Tomorrow… ‘Cause I Get Better-looking Every Day.

32. Jim Creighton, the first paid baseball player (in 1860) and a pitcher who transformed the game by making the position adversarial to the batter, died hitting a home run. He swung, ruptured his spleen, and died four days later at the age of 21.

33. Seven-time national tennis champion Bill Tilden was a pedophile. He traveled with hand-picked ball boys and was twice sentenced to prison for making advances on teenagers.

35. Hall of Famer Satchel Paige pitched three shutout innings in the major leagues at the age of 59.

36. Wilma Rudolph was the 20th of 22 children produced by her railroad porter father in two marriages. As a child, she survived scarlet fever, double pneumonia and polio.

39. Howie Morenz, the “Babe Ruth of hockey,” broke his leg during an NHL game in 1937, soon grew despondent, suffered a nervous breakdown, then died of a heart attack at the age of 35.

41. African-American tennis pioneer Althea Gibson once recorded an album and sang on “The Ed Sullivan Show.” She later turned to golf, becoming the first black woman to earn her LPGA player’s card.

43. Vince Lombardi DID NOT coin the phrase “winning isn’t everything, it’s the only thing.”

44. Bill Veeck, iconic owner of the Cleveland Indians and Chicago White Sox, began his career working as an assistant for his father, who was president of the Chicago Cubs. It was the younger Veeck who planted the ivy on Wrigley’s outfield walls.

46. After Francis Ouimet and his 10-year-old caddie Eddie Lowery shocked the world and transformed American golf by winning the 1913 U.S. Open (as told in my 2013 picture book Francis and Eddie), Ouimet won the U.S. Amateur championship the very next year.

47. As a child, Martina Navrtilova wasn’t told that her estranged father had committed suicide. She didn’t find out until she was 24 years old.

48. Alexander Cartwright, not Abner Doubleday, deserves most of the credit for inventing baseball as we know it—as the leader of the New York Knickerbockers club in 1845. As for Doubleday, he never even witnessed a baseball game.

49. After Roberto Clemente perished in a plane crash while bringing supplies to earthquake-ravaged Nicaragua on New Year’s Eve 1972, the Coast guard found the pilot’s remains, but never Clemente’s.

50. Oakland A’s owner Charlie Finley (who once hung up on me when I tried to interview him) introduced color uniforms, pushed through acceptance of the designated hitter, and tried to have sheep graze beyond the outfield fence.

53. Richard Petty won 200 races as the King of NASCAR, nearly twice as many as anyone else. Along the way, he broke the record held by his father, Lee Petty (54).

54. Former Purdue basketball star and longtime UCLA coach John Wooden is the only man to be enshrined in the Basketball Hall of Fame as a player and a coach.

55. Charles McNeil, a bookie in Chicago in the mid-20th century who has been credited with inventing the point spread as a sports gambling tool, was said to be a brilliant mathematician who graduated from the University of Chicago.