When a writer is building a character, crafting a back story, or setting a scene, nothing is an accident. The character lugs around an oversized purse? Speaks with a slight lisp? Drives a VW bus? Is Canadian by birth? It’s all purposeful.

With that in mind, I decided to explore a specific example of the writer’s choice—choosing a college. A few years ago, I wrote a magazine feature about fictional references to Cornell University (in novels, short stories, stage plays, screenplays, and TV scripts). I figured it was a good piece for Cornell Alumni Magazine for three reasons: 1) It was fun research, 2) It was a fascinating journey through the potential reasons why a writer might inject such a specific college reference, and 3) Cornell seemed like the perfect tool for exploring the concept. Harvard? There are surely thousands of literary references. Fresno State? Maybe none. But Cornell holds that middle ground that makes it ripe for the picking.

In Behind Closed Doors by Shannon McKenna, for instance, a millionaire’s girlfriend is described thusly: “American citizen, degree from Cornell, summa cum laude, woo woo, smart cookie. Fluent in six languages, yada, yada…” But occasionally writers chide Cornell as the college that isn’t in Cambridge. In the short story “Jim the Man,” Herbert Gold writes, “As a student at Cornell, Jim had carried a green sack bulging with books because at Harvard they carried green sacks bulging with books.” And in the movie Stella, Stephen Collins’ character admits, “I had to fight with my parents to go to Cornell. They both went to Harvard and think Cornell is slumming it.”


The eclectic list of graduates from the university in Ithaca, New York—in the pages of literature, that is—includes a mobster’s son with a penchant for property fraud (in The Negative by Michael Covino), a Russian spy (in Guess Again by Nora Santella), a hotel general manager in the fictional country of Absurdistan (in Gary Shteyngart’s 2006 novel of the same name), a dice-shooting pro football player (in Ruffians by Tim Green), a New York socialite forced into hiding after the murder of her husband (in An Invisible Woman by Anne Strieber), a celibate porn producer (in P, a novel by Andrew Lewis Conn), a disillusioned drug addict who sees ghosts (in World’s End by T.C. Boyle), an obese schizophrenic with an encyclopedic knowledge of low-budget horror movies (in The Ecstatic by Victor D. Lavelle), a psychic who lives with nine black cats (in Grave Creek Connections by Daniel Isaac Morris), a veterinarian in a traveling circus who rooms with a dwarf clown named Kinko (in Sara Gruen’s Water for Elephants), and a serial killer (in A Cold and Silent Dying by Eleanor Taylor Bland).

All of the references are intentional. Nicholas Evans, author of The Horse Whisperer, who decided to give his veterinarian protagonist a Cornell degree, told me, “After asking a hundred questions about a character’s background, only a small percentage of the answers finally make it into the books. But it’s not a waste of time because it helps you build a picture.”

A writer’s choice, however small, might inform the character or imply or enrich or encapsulate. Or sometimes it simply improves the bit. Back in 2007, on NBC’s “30 Rock,” Tracy Jordan was hoping to add a sycophant or two to his entourage. He and his crony Dotcom considered their options: 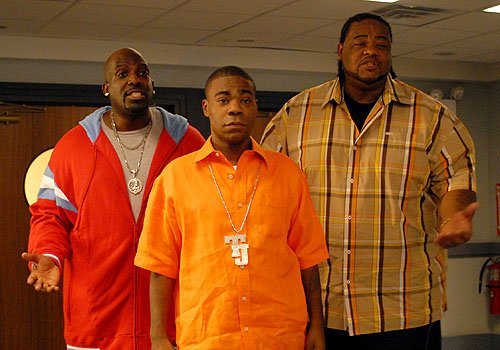 So there you have it. Cornell as punch line. Or as setting, as plot device, as nuanced detail, as character study.

Faux Cornellians have been conjured up by the likes of Kurt Vonnegut (Cat’s Cradle) and Thomas Pynchon (The Crying of Lot 49), both of whom are Cornell grads themselves. Also Philip Roth (Letting Go), Mary Higgins Clark (Pretend You Don’t See Her), Dan Brown (Deception Point), and, rather prolifically, Joyce Carol Oates (in You Must Remember This, We Were the Mulvaneys and a short story called “Life After High School”).

Twice, Cornell grads in literature have made their way to the Oval Office, both becoming the nation’s first female president (Florence Metzger in John Dalmas’ The Second Coming and Harriet Styles in Robert Skidmore’s The Distracting Splat at the Eiffel). Still, my three favorite fictional Cornell alumni (in all forms of fiction) are these:

Scarpetta, who was for many years the fictitious Chief Medical Examiner for the Commonwealth of Virginia, has sleuthed her way through nearly two-dozen novels by Patricia Cornwell. Amid her back story—born in Miami, raised by Italian-Americans, lost her father to leukemia when she was only twelve—is this tidbit: She graduated from Cornell sometime around 1970.

Melvin van Horne, better known as Sideshow Mel, TV sidekick to Krusty the Klown, was revealed to be a Cornell grad in the 16th season of “The Simpsons.” This masochist, who has been at the mercy of Krusty’s sadistic sense of humor for years, has been struck in the head with an axe, kicked headfirst into a birthday cake, and shot from a cannon. Once he even had liquid nitrogen poured down his pants. Typical Ivy Leaguer.

On NBC’s “The Office,” Bernard (played by Ed Helms) constantly and pompously reminded his colleagues that “I went to Cornell… Ya ever heard of it?” It was a means of revealing his insecurity while trumpeting his self-importance: “I never studied once. I was drunk the whole time. And I sang in the a capella group Nothing But Treble.”

As for a comprehensive reading list, besides Cornwell’s Scarpetta series, if you root for the Big Red you might enjoy these 65 novels: