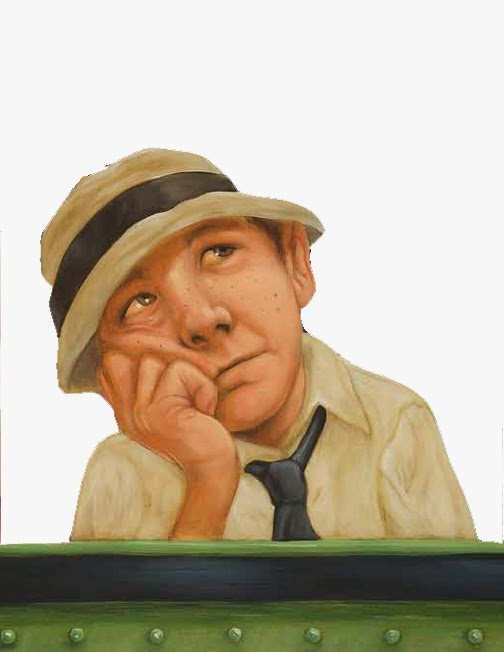 The first thing one notices upon entering Ron Muszalski’s ground-floor apartment is not necessarily the assortment of golf posters and prints covering the walls. It isn’t the myriad golf postcards and ashtrays and statuettes, nor even the collection of hats—from Merion, Oakmont, Olympic, Cypress Point—that decorate the single sofa in the tiny one-bedroom rental.

It’s the books. Enough to make a library blush. So many that his apartment seems to be more of a repository than a place of residence.

Bookshelves line the walls, floor to ceiling, of his bedroom. They crowd the hallway that leads to the bathroom. They block the entrance to a closet and obstruct his view through the living room window, the one looking toward the third fairway of the Pacific Grove Golf Links, the so-called Poor Man’s Pebble Beach on California’s Monterey Peninsula.

Muszalski—who, like a good golf score, is a shade under 80—caddied at Medinah during the Truman Administration. He managed Cambridge Golf Antiques at Pebble Beach for a dozen years. He now survives on Social Security checks, a large portion of which he devotes to his obsession. “I’m a bibliomaniac,” he says proudly, and his golf book collection now numbers more than 6,000 volumes.

He owns the classics, of course—Golf in the Kingdom, Dead Solid Perfect, books by George Plimpton and John Updike and Herbert Warren Wind. But lots of people have those. Muszalski, who meticulously restores old books, prefers to brag about his obscure titles. His collection, which has earned the attention of world-class bibliophile Alastair Johnston, includes titles like Golf and the Stranglehold, 89 Years in a Sandtrap, and Kill It Before It Moves. He owns a 17-page booklet published in Pakistan, a compendium of fatherly advice called Littlest at Golf. His oldest book, Traditions of Edinburgh, was published in 1868.

One of his newest books? Well, that would be mine. Having caught a glimpse of Francis and Eddie, my 32-page picture book about the wondrous 1913 U.S. Open, Muszalski invited me to autograph a copy and wander through his bookshelves. I was honored to have the book join his collection and, frankly, a bit curious about something that had been nagging at me for some time.

Where are all the golf books for kids?


“The best sports literature in the world is golf literature,” he said, as he guided me through his bookshelves. But as he held up a computer printout of all the children’s books about golf that he owns (his list is carefully catalogued), he shook his head and added, “Not for kids, though. Not that much.”

Indeed, of his more than 6,000 volumes about golf, fewer than 60 were created for young readers. Of course, Muszalski is discriminating in his taste. A book has to be of a certain quality—compelling, historical, dazzling, at least unusual—to meet his standards. But still, a few dozen books? “And that’s more than a hundred year’s worth,” he said, handing me the sparse kids’ list that includes everything from Michael and Patsy on the Golf Links (1933) to Curious George Plays Mini Golf (2008).

So I want to know why.

I also wanted to know which children’s books Muszalski would place in his top 18—that’s the through line of this Why Not 100 post. Fiction, nonfiction, history, poetry, whatever. I’ll be interspersing that collection throughout this story, but I’ll immodestly begin with the most recent book on it: When artist (and ardent golfer) Zachary Pullen and I discussed the notion of creating a beautifully-illustrated children's book about Francis Ouimet's stunning victory in 2013, we were stunned to discover that it had never been done. Sure, Mark Frost's 2002 masterwork, The Greatest Game Ever Played, was a bestseller, followed soon by a Disney movie. But here is golf's most remarkable underdog tale, and there is a loyal and lovable 10-year-old at the heart of the story, yet in 100 years the inspiring partnership between 20-year-old Francis Ouimet and little caddie Eddie Lowery never had been distilled into a version that could appeal to young would-be golf fans.

And maybe that's part of the problem. A few years ago, the National Golf Foundation revealed that the number of golfers aged 6-17 had dropped by nearly 25 percent between 2005 and 2008. The Wall Street Journal picked up on the story, lamenting that the game remained too intimidating for beginners. There have been many laudable attempts to remedy the situation on the golf course—The First Tee, U.S. Kids Golf, PGA of America's "Tee It Forward" campaign. But maybe part of the solution lies not on the links but in the literature.

The thinking seems to be that golf books for children don't sell because it is a sport with limited appeal to the very young, either on the tee or the TV. But to attract kids to a sport you have to draw them to the stories. You have to educate them (entertainingly) about historic moments and make them feel as if another one can happen at any time. Golf has as many riveting tales and remarkable characters as most any sport, not to mention landscapes and images that beg to be memorialized in picture books. Michelson’s book is a great addition. But where are the other books like that?

As for fiction, for kids, about golf, there are some options. These five from Muszalski’s list offer a slice of gravitas with their greenside bunkers:

But much of golf fiction is limited to lighter fare—whimsical picture books like the following:

And besides, think of all the children’s fiction about baseball. One of my Why Not 100 blogs (“99 hard-hitting baseball mysteries”) includes 39 books for kids. And those are just under the category of baseball mystery stories.

But I’m more curious about this: Why haven’t golf’s true stories been told for a younger audience? There have been football books for kids about the Gipper’s inspiring speech. Why not one about Ben Hogan's inspiring comeback? I've seen a number of children's tales about Babe Ruth's "called shot" (which likely didn't happen), but none about Gene Sarazen's "shot heard 'round the world" (which most certainly did). Boston icon Bobby Orr has been the subject of a picture book. So why hasn't Boston icon Francis Ouimet been immortalized in that manner until now? 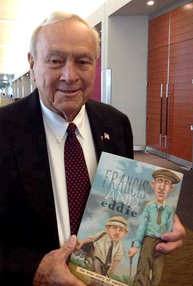 Kids love an underdog and tales of loyalty and teamwork. So how is it that a century went by without someone realizing that the event celebrated in Francis and Eddie may be the only championship story in sports with a 10-year-old involved every step of the way? We have the ultimate underdog protagonist in Ouimet, hoping to prove his worth against the world’s elite. And we have a partnership that launched a lifelong friendship.

Consider the most celebrated title-winning moments in history, many of which have been re-told in books for kids. I would argue that the Francis-and-Eddie tale trumps them all. Seabiscuit? Remarkable horse, but at least he had a pedigree (a grandson of Man o’ War, no less). Ouimet was the son of a French-Canadian immigrant who toiled as a gardener and dismissed golf as a pastime for the leisure class. The Miracle on Ice? It’s an iconic local-kids-make-good tale. But does it get any more local than living across the street from The Country Club in Brookline?

North Carolina State beating Houston? The triumph over the heralded Phi Slamma Jamma outfit in the 1983 NCAA basketball tournament is a classic David-over-Goliath moment. But in the great Harry Vardon and 1912 British Open champ Ted Ray, the amateur Ouimet took on two professional Goliaths in an 18-hole playoff. It’s as if N.C. State had beaten the L.A. Lakers. Plus, Jim Valvano’s search for a hug has nothing on Ouimet and his little caddie being lifted onto a delirious crowd’s shoulders. 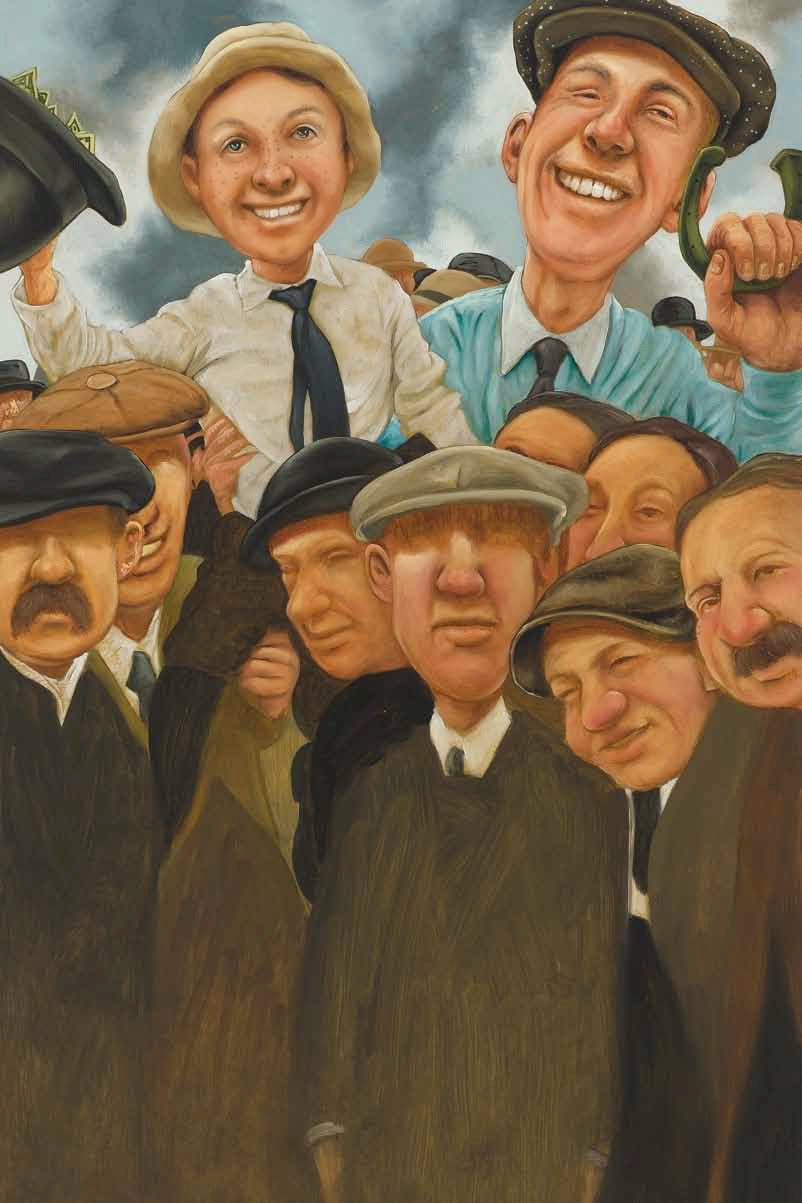 Baseball? Well, there’s Bobby Thomson’s home run in 1951, and the Amazin’ Mets in 1969. One was a riveting moment (“The Giants win the pennant! The Giants win the pennant!”). The other was a compelling narrative, the ultimate worst-to-first scenario. But Ouimet’s performance offered both theatrical elements—long putts on the 17th green (just a chip shot from his house) that elicited roars heard across the Atlantic, as well as a storyline that took the golfer (and his diminutive caddie) from unknown to legendary. Not a single spectator followed the duo after his opening tee shot during a qualifying round. By the end, more than 10,000 Bostonians were lining the fairways.

How about football then? Well, below zero temperatures ratcheted up the drama during the 1967 Ice Bowl between Dallas and Green Bay. But that’s still football weather. Much of Ouimet’s feat was accomplished amid a downpour and powerful gusts portending the winds of change in American golf.

And there’s that, too—a sport’s transformation. Two years after the Ice Bowl, New York Jets quarterback Joe Namath famously guaranteed a victory over the heavily-favored Baltimore Colts. His win legitimized the upstart American Football League, which was essentially half of professional football. However, Ouimet’s performance in Brookline catapulted an entire sport into national prominence. As a Life magazine feature declared a half-century later, “He put golf on Page One.”

Francis and Eddie is now for sale at the World Golf Hall of Fame, which is appropriate, of course. Ouimet was one of the original inductees. There are a bunch of folks who think Eddie Lowery should be in there, too. It’s also being sold at the USGA Museum, which devotes a single shelf in its gift shop to children’s picture books about golf. Mostly, I found “Peanuts” books about golf. But there were also some of these books from Muszlaski’s list (one of which happens to be my OTHER picture book about golf): 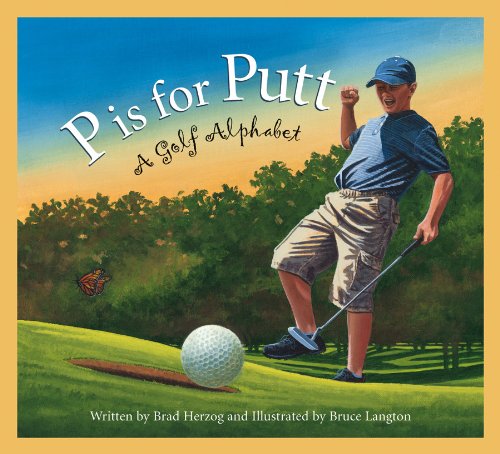 However, it’s time to move beyond sticker books, beyond how-to, and yes, beyond alphabets. I’m glad that the story of the ultimate gentleman amateur and the four-foot-tall caddie with the outsized composure has finally found its way into the pages of a book for kids who might be inspired to try the game. I hope it’s just a start—not for my book, but for all golf books for kids. Maybe this will launch a wave of realizations—that golf literature can apply to golf neophytes and that the game’s history is brimming with tales that might inspire them. Biographies are always a nice place to start a history education, and Muszalski praises these fine ones for young readers:

But beyond Tiger and Arnie, I want to see biographies written for kids about Lee Trevino and Ken Venturi and Nancy Lopez. I want to see Chi Chi Rodriguez as a swashbuckling pirate and Walter Hagen as a larger-than-life dandy. I want to read riveting children’s tales of Byron Nelson’s streak and Sam Snead’s creative putting and Seve Ballesteros’ brave battles on and off the course.

Nobody told Francis and Eddie they were dreaming too big, but I’m willing to be patient. One shot at a time, one book at a time. For starters, I’d like to see Curious George at Augusta.