Or there’s this one that I particularly like, a collection of various writers’ observations about love:

At the edge of a petal, a wild rose on the bud
The root of the matter, the warmth of blood
A mutual self-giving, a friendship set on fire
The poetry of the senses, an irresistible desire
A concerto, a harmony, a pitch perfect tone
When the joy of another is essential to your own

Swimming in the ocean of another’s soul
A blaze that becomes a deep-burning coal
A pure silver flame, the closest thing to magic
Invisible but transforming, the antidote to tragic
An indivisible whole that begins with a smile
Doesn’t make the world go ‘round, but makes the ride worthwhile

Anesthesia as a perpetual state, a gift, a welcome curse
Reflexes and reflections, the Amen of the universe.
The emblem of eternity, artistry at its height
Measured by fullness, makes all that was heavy light
The soul’s master key, the enchanted dawn of the heart
Puts the fun in together, puts the sad in apart

Metaphysical gravity, divine vitality
A souvenir, delicious torment, spiritual sensuality.
The heart at your service, a madness most discreet
A great beautifier, a preserving sweet
Two volumes of one book, a single thought repeated twice
Knows no league, glimpses heaven, dwells in paradise

Strives toward more than it attains, knows not impossibility,
A confirmed passion, the bravest thing, the parent of humility.
Releases, promises, illumines, touches the sky
Like smoke made from the fume of sighs, like the perfect crime, like pi
Expands, cures, knows not why, feels no burden, rescues me
The accomplishment of a beautiful dream. All it’s cracked up to be

Not bad, right? But I fear that whatever I do, I will never top poet Robinson Jeffers. If creating poetry is a bit like building a house—requiring careful construction and reflecting both philosophy and style—then it follows that a home is like a poem. This is most evident at Tor House, Jeffers’ longtime residence in the Carmel-by-the-Sea on California’s Monterey Peninsula. It is a lovely and lyrical place that he expanded painstakingly over the years, just as he expanded his body of poetry.

Upon their arrival in Carmel in 1914, Jeffers and his wife, Una, would often stroll to their favorite spot—a craggy hill (or tor) which would soon mark the site of their home, built primarily from the rocks of Carmel Point. Most days consisted of Jeffers constructing his poems in the morning and his home in the afternoon, a house with a coastal view so grand that Jeffers faced his desk inland, figuring otherwise he would never get any work done. The building offers a hint of worldly whimsy (one can spot portholes from one of Napoleon’s ships, a tombstone from Ireland, even a portion of the Great Wall of China). But at its essence, it is an intimate creation—especially Jeffers’s romantic decision to build for Una a stone tower on the premises.

For five years, Jeffers rolled boulders up from his private beach and meticulously set them into place, making “stone love stone,” as he put it. By the time he completed the structure, it was as much as six feet thick and almost forty feet high. He named it Hawk Tower, in honor of a frequent flying visitor, and observed, “I hung stone in the sky.”

So if you visit the tower,  you can corkscrew your way up a stairway to Una’s second-floor sanctuary, then ascend a little turret on the third floor, and then an even steeper stairway to the top of the turret. From there, you can look out toward the endless sea and the seashore upon which a man and his wife built their life together. And you can’t help but marvel that Robinson Jeffers’s finest love poem was made of stone. That’s the kind that lasts forever. 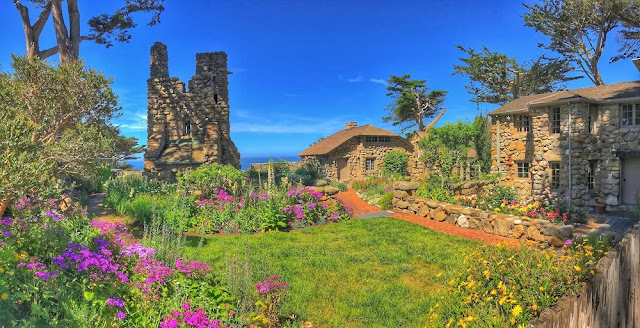