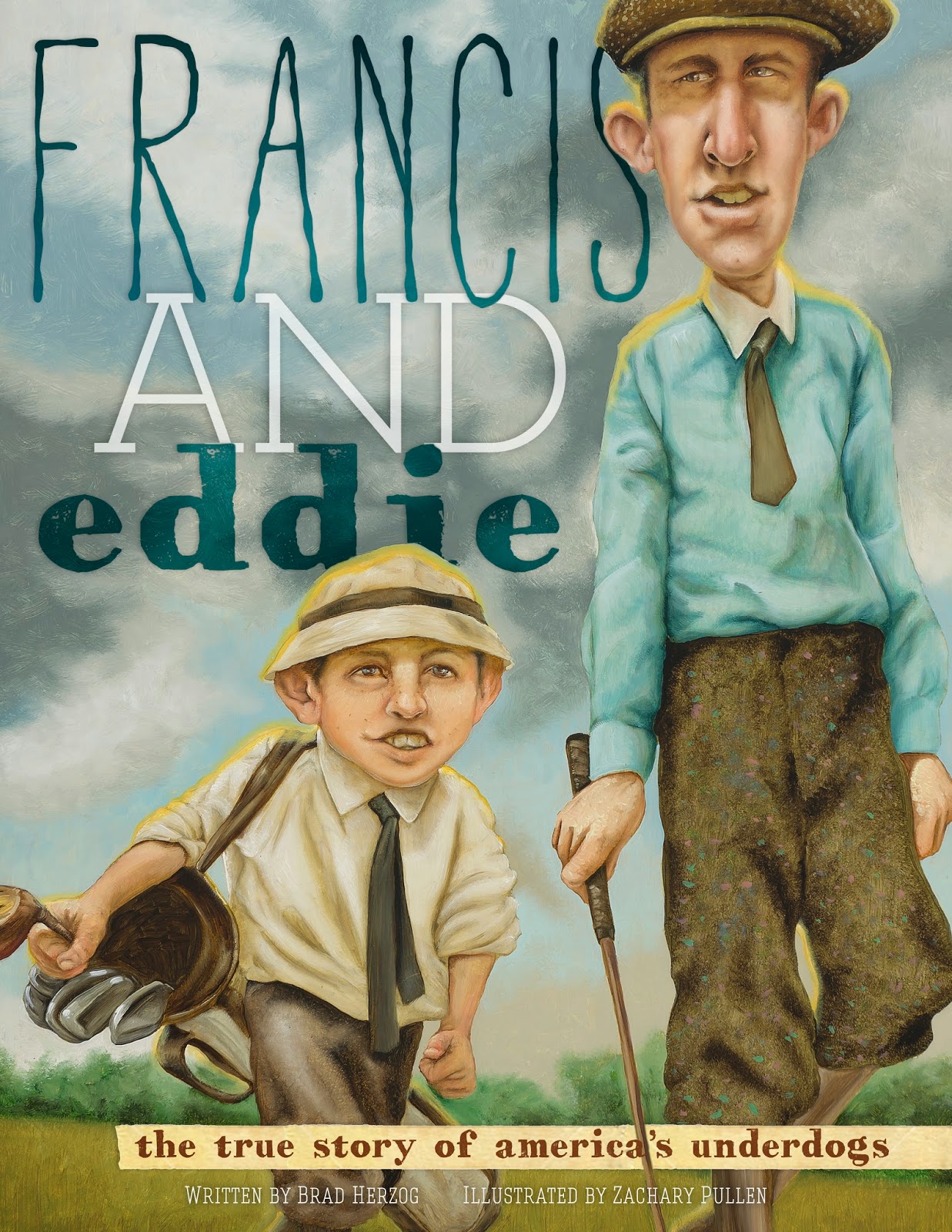 My motivation for writing the children’s book FRANCIS AND EDDIE (Why Not Books, 2013) didn’t necessarily come from the fact that I think it ranks as perhaps the greatest underdog feat in championship sports—the tale of Francis Ouimet beating the best golfers in the world to win the U.S. Open. It wasn’t even because it struck me as the ultimate local-boy-makes-good story—a kid who literally lived across the street from the golf course in Brookline, Massachusetts, right near the 17th hole. He taught himself to play be sneaking onto the course in the dark and the rain, taught himself so well that he qualified to compete in the national championship, then sank an ultra-clutch putt on that very 17th green to shock the world and catapult golf onto the front pages for the first time.

No, that’s not why either. It’s because of Eddie Lowery.

Ouimet’s prospects were so dim that his regular caddie opted instead to carry the bag of a French pro, figuring he could share in some prize money. During a practice round, a boy named Jack Lowery had been an able replacement, but only minutes before Francis’s scheduled tee time for his Tuesday qualifying round, Jack was nowhere to be found. That’s when a tiny fellow, just four feet tall, came running up to the practice green and offered five words that would launch an iconic partnership: “I could caddie for you.”

Eddie Lowery was Jack’s little brother. He was skipping school. He was ten years old. “My bag’s as big as you are,” said Ouimet, but it could be that the golfer saw a bit of himself in the boy, an underestimated kid reaching for respectability. Or, perhaps he figured he had nothing to lose. “All right then, Eddie, let’s go,” he said. “Just please call me Francis.” And that is how, over the next several days, a child stood at the center of this extraordinary athletic saga.


There have been a great many precocious athletes. Joe Nuxhall pitched in the major leagues, for the 1944 Cincinnati Reds, at age 15. In 1976, 14-year-old Olympic gymnast Nadia Comaneci became an international sensation.  In August 2013, when she was still nearly two months short of her 11th birthday, California native Lucy Li became the youngest person ever to quality and compete in the USGA Women’s Amateur golf championship.

But that’s not what I’m celebrating here.

There have been a good many times, too, when kids have influenced play on the courts or fields. At the 2011 French Open, for instance, a ball boy mistakenly ran onto the court during a point, thinking the point was already over. At the same time, Victor Troicki was completing an overhead smash against Andy Murray, but the point had to be replayed. And Murray won it. But Troicki still won the game. So nothing really changed.

Sometimes, however, the unexpected appearance of a kid—as a replacement, a fan, an inspiration—has made all the difference, occasionally even a historic difference. So here is a six-pack of small wonders, starting with the earliest (and youngest):

One of the stranger chapters in Olympic history occurred during the infancy of the modern Games at the 1900 Summer Olympics in Paris. It happened during a rowing event called coxed pairs, which features boats with two rowers and one coxswain (the lightweight person who sits in the boat and directs the rowers). Before the finals of the event, the team from Holland decided that the coxswain they normally used was too heavy. So legend has it that the decision-makers opted to replace him with a young French boy that they plucked from the crowd. Naturally, it wouldn’t even be close to allowable these days. The boy, whose name has been lost to history, may have been as young as seven years old. But he and his new teammates won the gold medal. At the 1913 U.S. Open, they made for an odd-looking pair, Francis Ouimet and Eddie Lowery. The golfer was lanky and loose-limbed; the caddie was small even for his age, ruddy-cheeked, with a hint of mischief in eyes peeking out from beneath a white bucket hat. By the end of the tournament, they would be dressed almost exactly alike, walking side by side, each bolstering the other. Francis made Eddie feel important, and Eddie made Francis feel at ease amid the maelstrom of world-class competition, even when they later spotted a gaggle of dignitaries surrounding a particularly corpulent fellow in the gallery. All of the anxiety that accompanies swinging a golf club in front of former President William Howard Taft is diminished when your caddie asks, “Who’s the big fat guy? He looks kinda familiar, doesn’t he?”

As Mark Frost, author of TheGreatest Game Ever Played, put it, “It was almost as if somebody rubbed a lamp and said, ‘Give me someone who will give Francis confidence.’ And the perfect person shows up. He just happens to be half of Francis’s size.” Early in their first round together, Francis turned to Eddie and said, “I think you and I are going to be good friends.” Their friendship endured for more than half a century.

During the 1926 World Series, 11-year-old John Dale Sylvester asked Babe Ruth to autograph a baseball. Sylvester, a fine ballplayer himself and a diehard Yankees fan asked the favor of his idol from his hospital bed (a horse had kicked him in the head, leading to life-threatening brain inflammation). On a ball signed by every Yankee, Ruth wrote, with somewhat befuddling grammar, “I’ll knock a homer for Wednesday’s game.”

He didn’t. He hit three in Game 4, an unprecedented feat. Was Ruth motivated by the promise? Who knows? The Yanks actually wound up losing the series, the last out coming when Ruth was thrown out attempting to steal second base.

As for Sylvester (who lived to the age of 74 and became a business executive), he found himself with some pretty sweet possessions, including an autographed football from Red Grange and a tennis racket from Bill Tilden (sad irony: Tilden was later revealed to be a pedophile). All three collectibles went up for auction in on February 6, 2014, which would have been—no coincidence—Babe Ruth’s 119th birthday. It used to be that when a baseball team was losing badly, frustrated fans would get a kick out of yelling, “Put in the batboy!” But on July 19, 1952, Charlie Ridgeway, the manager of the Class D Georgia State League’s Fitzgerald Pioneers, actually did it. With his team down 13-0, batboy Joe Relford stepped up to the plate as a pinch-hitter. He grounded sharply to third to end the inning, but he followed that with an excellent defensive play in centerfield. After the game, fans ran onto the field to congratulate him, stuffing his pockets with money. Sadly, however, both the umpire and the batboy lost their jobs that day, and the manager was fined and suspended—not because Relford was 12, but because he was the first African-American player in the league.

Game 1 of the American League Championship Series—October 9, 1996, Yankee Stadium. Bottom of the eighth inning, and the Baltimore Orioles led 4-3. Young New York shortstop Derek Jeter stepped to the plate and clubbed a long fly ball to deep right field. Baltimore right fielder Tony Tarasco camped under it, ready to catch the near-miss. Except that’s when 12-year-old Jeffrey Maier reached over the outfield fence and plucked the ball into the bleachers. “And what happens here?” shouted announcer Bob Costas. “The contention by Tarasco is that the ball is descending, and the fan touches it. He’s right! He’s right!”

Replays confirmed that the ball likely would have been caught by Tarasco, but umpire Richie Garcia ruled it a game-tying home run. Maier was lifted on to the shoulders of fans in right field. “Certainly, he’s affected the course of the game,” said Costas, to which color commentator Bob Uecker added, “And maybe the Series!” Indeed, the Yankees won the game in extra innings and went on to win the World Series, the first of four New York titles in five years. Maier went on to play college baseball, becoming the all-time hits leader for the University of Connecticut. But when he was 12, one headline read: THE KID CATCHES ON AS NEW YANKEE HERO.

Nick Gilbert suffers from neurofibromatosis, a nerve order that causes tumors to sprout on a whim. But his father, Dan, is the owner of the NBA’s Cleveland Cavaliers, and he—along with most of the fans in Cleveland—think Nick is one of the luckiest kids on the planet. Or at least a good luck charm. In 2011 the 13-year-old stood there, his eyes wide through his thick lenses, and represented the Cavs at the NBA draft lottery. Cleveland had a 2.8 percent chance of drawing the top pick. Yet that’s exactly what happened. Two years later, with Nick again serving as the face of the franchise, they had a 15.6 percent chance of repeating the feat. Once again, as Nick’s serious look contradicted the vibe of his maroon bowtie, Cleveland again drew the top pick. Did Nick actually actively do anything to make this so? Well, no. But as one sports columnist put it, “Certainly, there’s no skill involved when it comes to hunching over a team-addled podium while waiting for your name to be called. With Nick Gilbert, it’s about presence.”